To celebrate London Fashion Week Westfield is holding a car boot sale from 21-26 September 2010. About 20 Hyundai cars will each showcase a particular brand. One of the cars will be Mary's Living and Giving Shop for Save the Children.
Set up by the Grande Damme of retail, Mary Portas, to raise funds to help children all over the world, The Fashion Lives Campaign has gained support from major brands such as The V&A and Vintage Channel.
Jessica Light Trims and Tassels are delighted to add our support to this fanastic cause and have donated products which will be sold from Mary's car.
Posted by Jessica Light at 13:05 No comments:


It's been a bit of an Arts and Crafts summer with excursions to William Morris' Red House, the splendourous orientalism of Leighton House in Holland Park [my favorite bit is the seat built into the staircase- the perfect place for a midnight tryst], and the absolute gem that is Little Holland House.
Nestled quietly in the surburban peace that is Carshalton Beeches- Yes it is a place and not the name of a fey, lily-livered young man of dubious morals in a Dickens novel- and hidden behind a pebble dashed exterior [is it wrong to like pebble dash? I find myself really quite taken with it] lies the creation of an extrordinary man, Frank Reginald Dickinson.
Inspired by William Morris and John Ruskin, Dickinson, with a £300 loan and his fiancee Florence's savings, began building his dream home in October 1902. He and Florence moved in on their wedding night, 24 March 1904, and spent their honeymoon sanding, staining and making their vision of an "Ideal House" into a beautiful home.
Not only did the highly creative Frank build the house but he also made all the fixtures and fittings, the furniture, and even the art on the walls and carvings are his handy work. The Art Nouveau ceramics all came from Doulton where Frank had worked, and the curtains in the bedroom were embroidered by Florence.
The first room you enter is the open plan dinning/sitting room. There are portraits of Franks family inserted into the wood panelling and on the table is the gift Frank gave to his wife on their 25th wedding anniversary. He didn't just pop out to the nearest garage and get a wilted bunch of powdery, pungent carnations, but learnt how to silversmith and made Florence a stunning teaset. 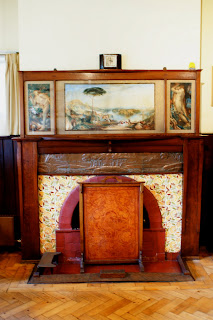 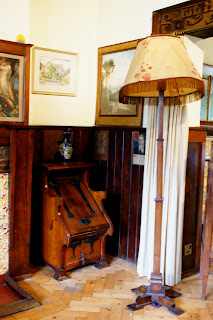 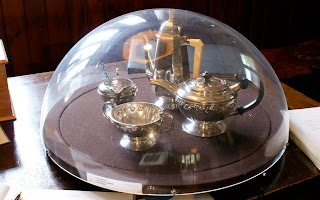 The silver teaset Frank made for his wife 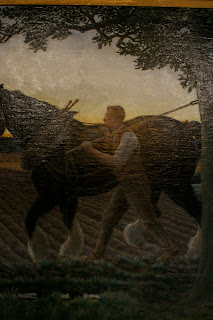 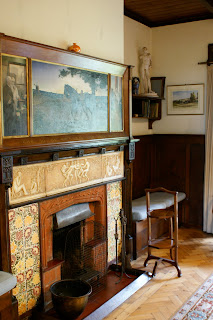 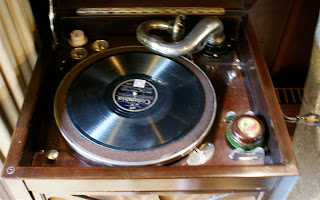 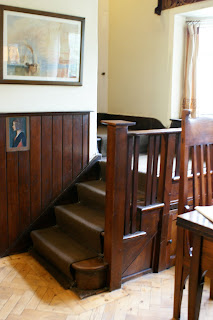 In the corner of the dinning room is the staircase which has a small platform that was often used as a stage during the many gatherings, dances, discusion groups and musical evenings that were held at the house.
Frank and Florence's bedroom is decorated mainly in calming blues and greens, with a frieze running around the room and "O sleep it is a gentle thing" carved into the bed headrest. 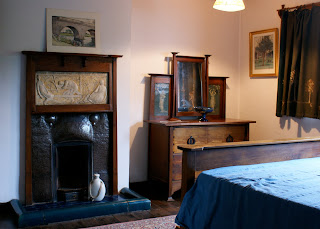 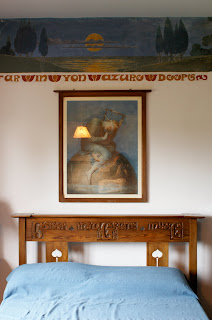 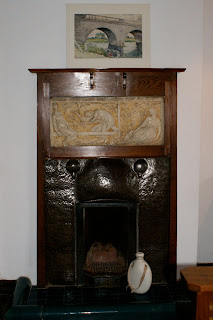 Compared to the exotic opulence of Leighton House, you really get a sense of Little Holland House being lived and loved in. It's almost as if Frank and Florence are still there welcoming you. You can sit in their chairs, read their books, probably have a nap in their bed if you were so inclined. You even have to ring the doorbell to get in as if you've come round for Sunday tea.
The Dickinsons not only embraced the Arts and Crafts asthetic but also it's ideas of humanity and equality as seen in the Humanist slogun carved into one of the beams on the ground floor.
"Serve Humanity, the Gods we know not"
Little Holland House, Beeches Avenue, Carshalton. Open 1st Sunday of the month. Free

Posted by Jessica Light at 18:37 No comments: