I grew up with John Lewis. The Oxford Street branch was just a hop, skip and a jump on the 53 bus from Camden Town. I was at my most frequent a customer during my teenage years when I started making my own clothes and their fabric department [then the whole ground floor]became my sanctuary of choice when I bunked off school. For me it was an enchanted forest of fabrics. From everyday corduroys of every hue to papery Honan silk that rustled under one's touch.
I spent so much time there that even my peers began to notice my absence from the usual adolescent revelries. 'Where's Jessie? 'She's gone to John Lewis...again!'. I was even teased mercilessly by the boy next door about it, just before he and his pesky mate emptied my underwear drawer out of the window into the street below, causing the tree in our front garden to suddenly sprout bizarre bra and knicker shaped blooms.
The John Lewis building is so familiar to me that I sometimes forget it also introduced me to Barbara Hepworth, who went on to become one of my favorite artists. 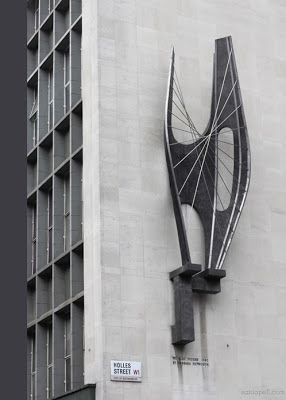 Barbara Hepworth sculpture on the side of John Lewis, Oxford Street

Barbara Hepworth studied at the Leeds School of Art, where she met Henry Moore who she was to be associated with artistically for the most of her career. She continued her training at the Royal Collage of Art, London.
Working in mainly stone and wood applying carving techniques, she soon became one of the leading exponents of the abstract art movement in Britain in the 1930's.
She married her second husband, artist Ben Nicolson, in 1932 who exposed her to wider European art movements. They later moved to St Ives, Cornwall, where Barbara died tragically in 1975 in a fire in her studio.
For me her work has always exuded a warmth and aesthetic perfection of form that comes from her complete sympathy for the materials she used. Unlike Moore, whose sculpture I find leaden and cold [although I love his drawings and textile designs which have life and vibrancy]Hepworth's work pulls you in to have a physical connection with it. You just want to hug it, and if you are ever in St Ives go and see her studio and garden which is now a wonderful museum. 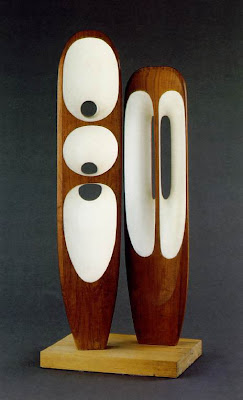 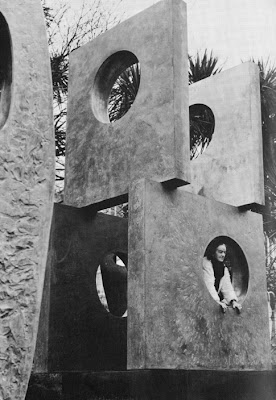 So it seems quite apt that my first foray into the retail world should be with John Lewis, a store it seems, that not only I feel, but everyone I speak to, still holds an affection and trust with it's customers today as it always did. 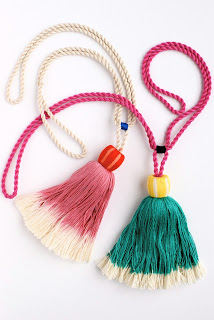 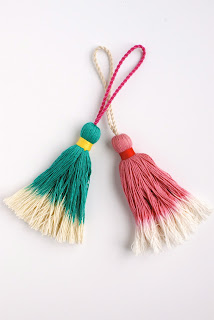 Above and below,
Jessica Light Trims and Tassels products now available in
John Lewis, Oxford Street and Edinburgh branches and on the John Lewis website 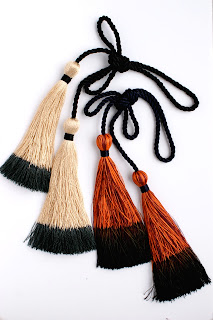 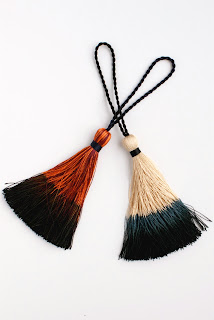 And what happened to the boy next door? Well he became a very talented graphic designer with his own highly successful practice, 01.02,and who, incidentally, designed my logo. Ta dah! 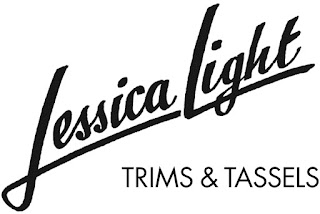 Posted by Jessica Light at 13:20 No comments: