Jessica Light Trims and Tassels, having shown at The London Design Festival for the last five years, decided we deserved a well earned breather and this year became spectator rather than performer. So here is our meander through the shows and some of our personal highlights.
Leading the pack was Wrong For Hey. A design collaboration between Danish brand Hey and London designer Sebastian Wrong which resulted in a collection of furniture, textiles, lighting and accessories all showcased in an exquisitely restored Georgian town house in St James Park. 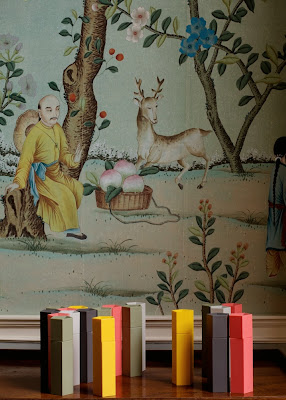 What I adored here was the juxtaposition of modernist aesthetics within a historical context and how well the two styles either bounced off or completely married with each other, so on occasion it was difficult to tell what was what, what?
There was a rational to this show- the evolution of design while recognising it's heritage. Those Georgians knew a thing or two about harmony of space and proportion. With their clean line of spatial symmetry, muted hues and quiet interiors [although they weren't adverse to the odd splash of decoration as seen in the Chinoiserie craze]it could be argued that they were the first to venture into minimalism [unless you wanted to be really pedantic and bring up the classical influence on 18th century design]. It could also be said that they invented the discipline of design as we know it today with this period seeing some of our greatest designers in action- Adam, Chippendale and Gibbs. So using this backdrop to show this new very contemporary collection seemed entirely natural but at the same time quite brave.
I sometimes feel that certain sections of the design community tend to want to compartmentalise everything - You do that so you belong over there and your style is this so you have to go there [snore]- and the never the twain shall meet- but it's the mixing of concepts, ideas and movements that can sometimes produce the most exciting visual experience, and this is what happened at Wrong For Hay.
Chomping at the bit were one of my favourite brands, Front. Having first come across their exquisitely made silk carpets at Decorex two years ago I was instantly smitten. Then they were showing muted Turkish inspired designs that were purposely worn and faded in places. A look I've since noticed elsewhere in rugs and wallpaper [could Front have instigated the new dip-dye?].
So what do you do when everyone starts jumping on your wagon of bands? You do what Front do and move on visually. Fronts new collection, based on Eastern European folk textiles were bold, bright and helped along with what looked like splashes of bleach or dye, but were actually part of the patterns. 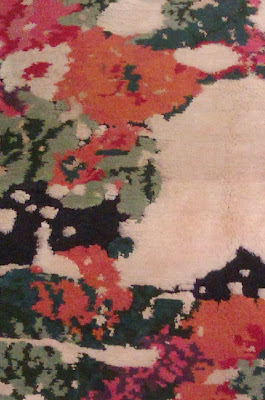 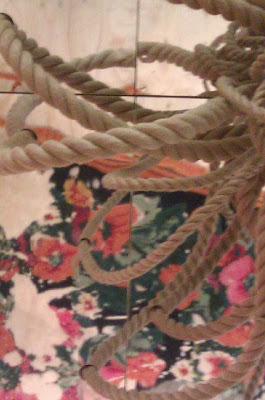 Above, Front who showed both at Superbrands and Decorex 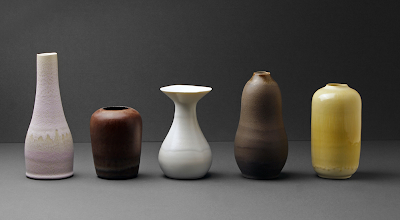 Frolicking in the paddocks was one of the main colour stories I noticed, a, dare I say dirty, mix of odd colours with a teeth squeaking acid yellow, grubby lavender,flat smoke blue and Germolene pink at it's core. These tones were very much in evidence in the beautiful fragile ceramics of Copenhagen company, Tortus, who were at Tent London and some of Farrow and Ball's new paint colours at Design Junction. 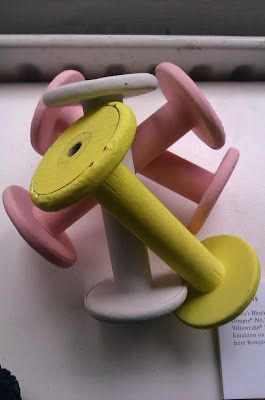 More off colour schemes could be seen on the Wovenground, the one-stop rug source, stand at Design Junction. This company stocks another of my favourite textile brands, Gan Rugs. 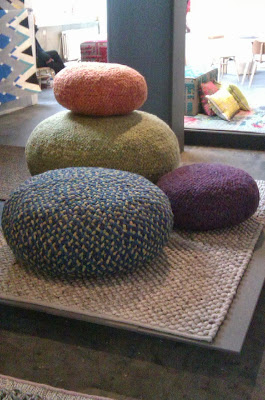 Oddball colours on the Wovenground stand

Spanish company Gan Rugs, born in 1941, make not only rugs but co-ordinating modules. Giant knits, oversized unfinished cross-stitch and magnified plaits are used to create pattern and texture while creative use of colour combinations imbues mood and atmosphere. Their impressive roll call of designers include Patricia Urquiola. 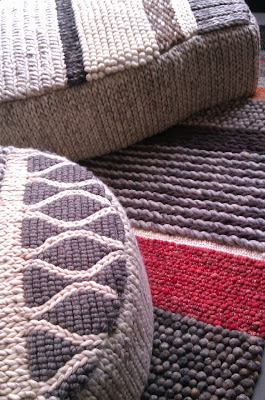 Above and below, the wonderful Gan products. 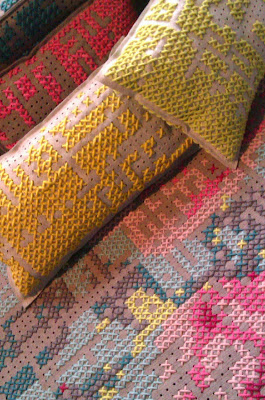 In fine fettle were the new upholstery fabrics from Eleanor Prichard seen below. 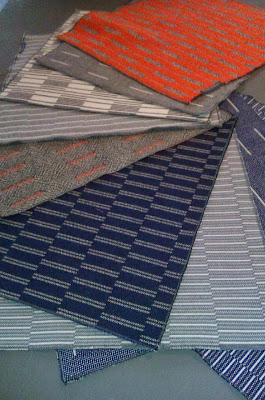 Designed and sampled in Eleanor's Deptford studio and woven in Scotland on the Isle of Bute, these wool reversible geometrics, in a colour palate of neutral navy, grey and chalk with a dash of blood orange, are a wholly British affair [Hurrah!]
In the first instance these highly considered cloths will be probably be banded into the Mid-Century genre [more boxation], but they have much more depth and versatility than that. I was reminded of traditional timeless Scandinavian Rep weaves, a sturdy structure, that goes back centuries which resulted in tough textiles used for rugs, runners and seating.
I think Prichard's new fabric designs have a timeless longevity, and would work well in many different stylistic settings and I believe Eleanor has plans for some exciting furniture collaborations. 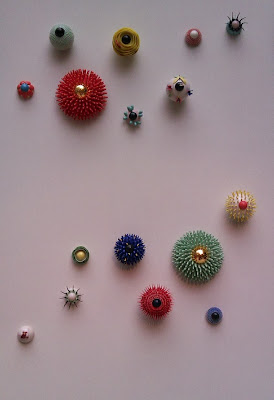 
On a more quirky note were the carefully arranged clusters of surreal, almost cartoonesque, eyes from ceramic artist Myung Nam An at Squint, that observed you with wry humour and an anemone charm. I was also reigned into the artists interesting use of colour.

Daniel Heath, who showed at Tent London, produces detailed, delicate images inspired by nature that adorn bespoke printed wallpapers and material surfaces such as mirror and glass. I was particularly drawn to his etched reclaimed Welsh slate tiles that provoked an ethereal lyrical nostalgia -Dylan Thomas gently canters the country lanes with the Bauer brothers. 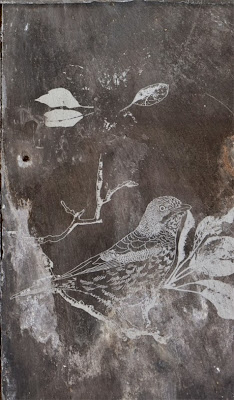 LeD's stand at Decorex was a weavers delight and it was fascinating to meet and talk to the designer behind this exciting textile company, Luc Durez.
Durez's weaves are sampled by him on his hand loom and then Jacquard woven in his native Belgium. Abstract, textual and some with such large repeats that they look like unique single panels, these shimmering weaves were all constructed out of man-made fibres woven into metal warps. 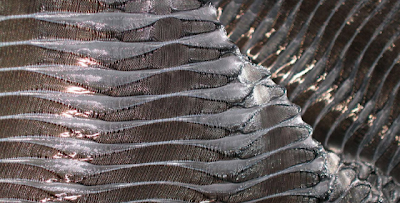 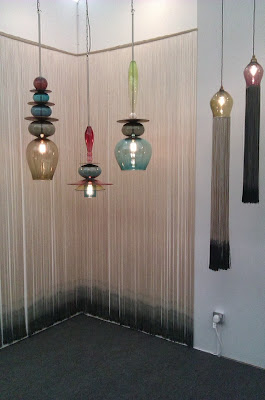 As stated at the beginning we didn't show this year but that wasn't entirely true and we trotted onto the Curiousa stand at Decorex.

As for next year? We'll be back with a new high-luxe thoroughbred collection of passementerie and a new [budget permitting] exciting product launch. What and where? Well keep an eye on our stable door.
Posted by Jessica Light at 12:09 No comments: