This year, for the first time, we'll be swishing our tassels and tasselating our trims at Decorex.
Decorex is the show aimed at the luxury top end interior sector and this years theme is Future Luxury.
We'll be launching Ceylon, a brand new passementerie collection, and Botany Bay, a new concept of outsize room trims that incorporate walnut and coconut elements, speciffically designed to decorate interior spaces. Didn't you know just trimming a cushion or having curtain ties is just so last year darling!
We will also be showcasing a tri-collacboration with Elle Decoration Design Award 15 winner, Liam Treanor and chair caner, Rachael South. This will be an ash bench with a hand-woven braid Box Weave seat which is not to be missed! 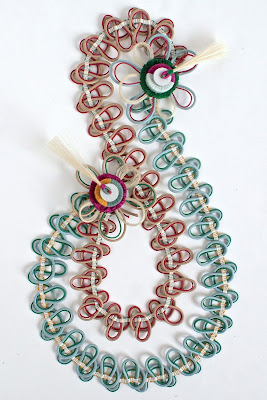 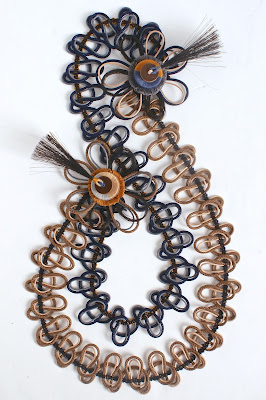 DULUX COLOUR FUTURES AT TENT
It seems very fitting in my jubilee year of making that I'm returning to the show where I launched my first paasementerie collections under my own name in 2008, Tent London.
I'm delighted to be involved with the Dulux Colour Futures exhibition at Tent where I, with four other creatives, Kit Miles, that Miss Margate Zoe Murphy, Anthony Roussel and Mark McClure will be interpreting with an instilation and talk, the four major trend stories and the 2016 colour of the year.
Tent London,
Old Truman Brewery,
Brick Lane,
24-27 September

Talking of jubilees here are my next picks from the last 25 years…
GOLD PASSEMENTERIE
This started as a play with some passementerie techniques to create rigid forms and went on to be the staring point for other projects. One such project was with jewellery designer Lesley Vik Waddell on a colection that incorporated elements of this type of passementerie as well as Dorset Button style covered rings in subtle dusky pinks, whites and a hint of magenta . Unfortuately I have no images of this collection as it was fabulous and went on to be one of Lesley's best selling collections. 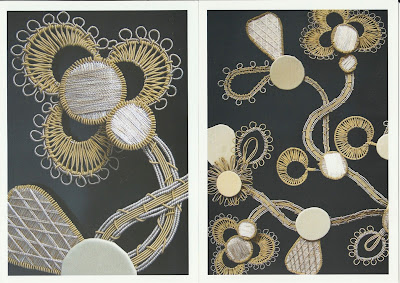 Posted by Jessica Light at 12:56 No comments: