Jessica Light Trims and Tassels are launching our first diffusion range on our e-shop Jessica Light Shop at the beginning of March. 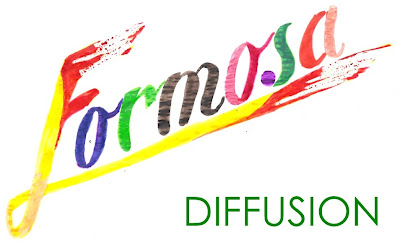 Taking inspiration from one of our best-loved collections, Formosa, this new range will feature beaded trims,fringes and tufted braids with coordinating tiebacks, tassels and rosettes, in sweet fruity happy colours. These design-led trims will still have the signature Jessica Light Passementerie With a Twist that runs though all her collections, but will have a more affordable price-tag and are specifically aimed at the retail market.
They will be manufactured in the U.K. as we here at Jessica Light are passionate about keeping the flag flying for British Industry, and if needs be;
We shall weave them on the beaches,
We shall weave them in the fields and in the streets,
We shall weave them in the hills;
We shall never surrender.
Posted by Jessica Light at 19:38 No comments:

TOM THOMSON AND THE CANADIAN SEVEN

I committed two cardinal sins of exhibition exploration recently; 1, I didn't book ahead, and 2, I went on the last day. Queue? I would have needed a million little fingers to have wound it around. Even so it was worth it to see Tom Thomson and The Canadian Seven at The Dulwich Picture Gallery.
The Canadian Seven were a group of early 20th century painters who stove to capture the wild, and sometimes harsh Canadian wilderness. Heavily influenced by Van Gogh and Post-Impressionism, these painters set out into the great outdoors to set the most unforgiving, remote, landscapes to canvas. They climbed mountains, scaled rivers and lakes in canoes, and even set their easels up at the Arctic.
They used a palate of off-sludge sands, bald beige, dead lilacs, pallid greens and ice blues, which were given intensity by swathes of azure blue, polar white and moments of primary yellow, deep orange and rustic rusts; while their use of bold brushstrokes created texture and depth to produce images that conveyed the desolate drama of their subject. 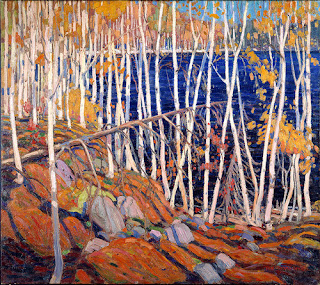 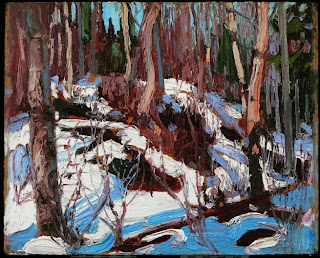 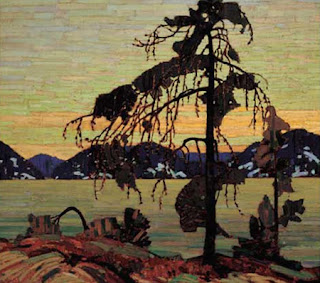 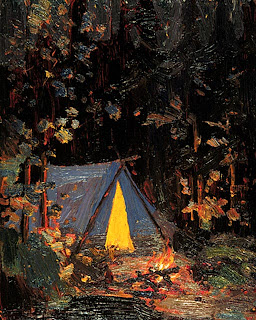 Above,
Paintings and sketches by Tom Thomson
I was most drawn to the paintings of the instigator of this movement Tom Thomson, especially his small sketches in oils. He even managed to make camping look good.
Thomson was the very embodiment of his art and male hardiness, living in a wooden shack, hunting and fishing his own food, and going off for days in his canoe to find isolated locations to paint. He has since gained a certain notoriety due to his mysterious untimely death in 1917. He disappeared one night on Canoe Lake only for his body to be washed up 8 days later. The fact that his body was exhumed after a very quick burial to be reburied in his birthplace of leith has given rise to speculation as to whether he fell or was he pushed. 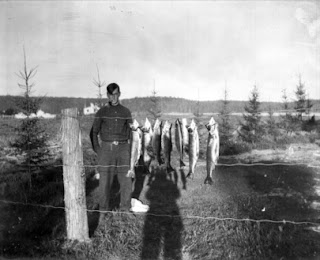 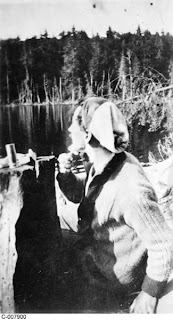 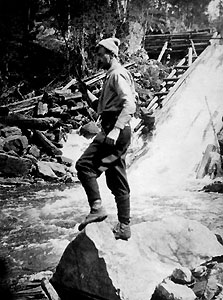 Above,
3 pictures of Tom Thomson being Mr Outdoors.
Posted by Jessica Light at 17:39 No comments: