Architects, generally speaking, are a right pain in the proverbial. Let one into your home and they won't leave without telling you to build up, down, sideways, or knock though. I should know because not only do I have friends of this profession persuasion but I also grew up with one and were surrounded by them. From an early age I knew my perpendiculars from my gothic revivals having been dragged around every building of note.
So why would I want to visit an exhibition devoted to Architecture? Well despite, or maybe because of, all of the above I love structure, and the qualities of space, light and pattern that structure creates. 'Sensing Spaces-Architecture Re-imagined' at the Royal Academy explores all those aspects by commissioning a range of global practitioners, such as Kere Architecture and Kengol Kuma and Associates, to create site specific instillations adhering to the brief of inhabiting space in a way that transcends the visitors traditional notions of what Architecture constitutes. This exhibition is interactive and sensory, inviting the viewer to experience the exhibits not only through sight but touch, smell, and actual participation in a growing construction- to become part of, and form shape within, spaces that have already shaped the space within the actual galleries.
At the end is a wonderful film where all the exhibitors talk about their approach and considerations to the process of designing buildings. A common consensus was that it could have been made into a series of six films about each architect as it was so engaging and interesting. 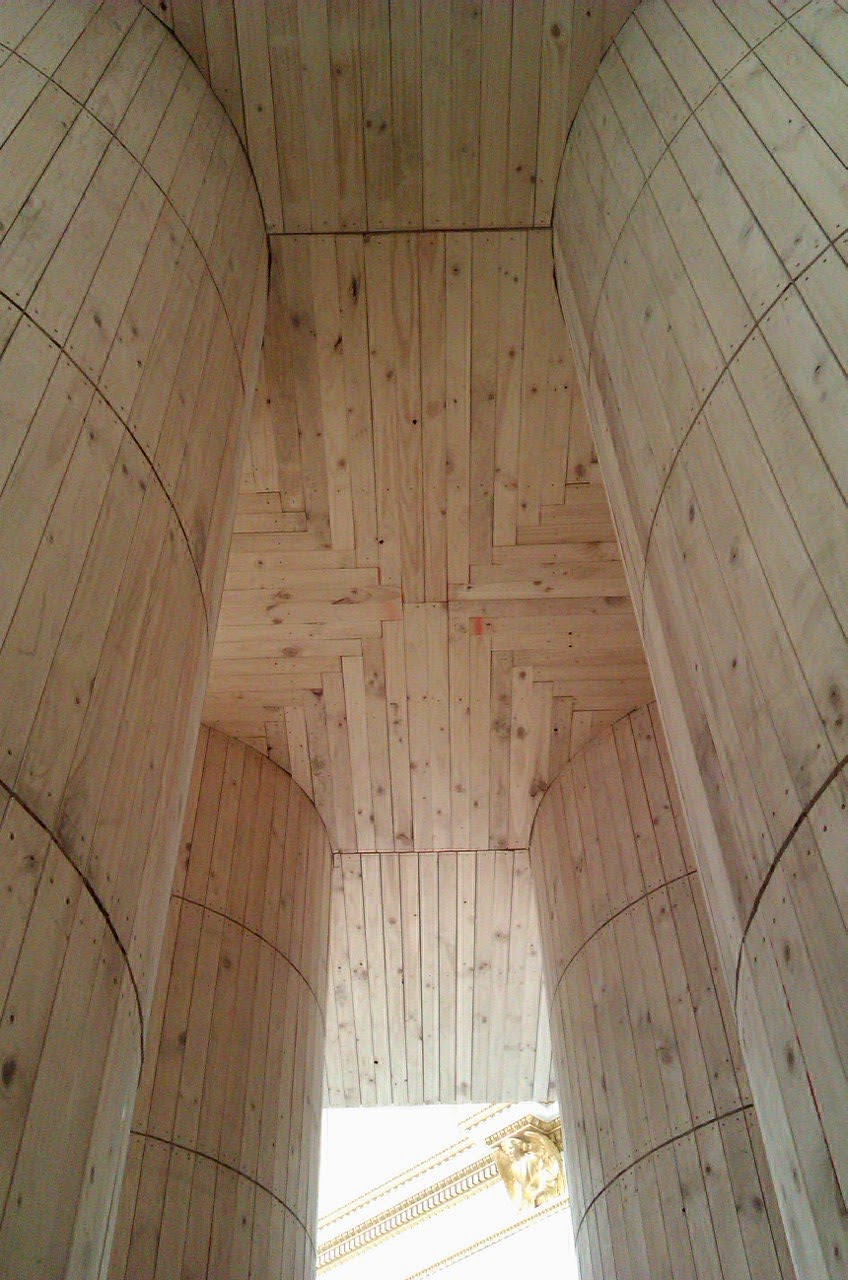 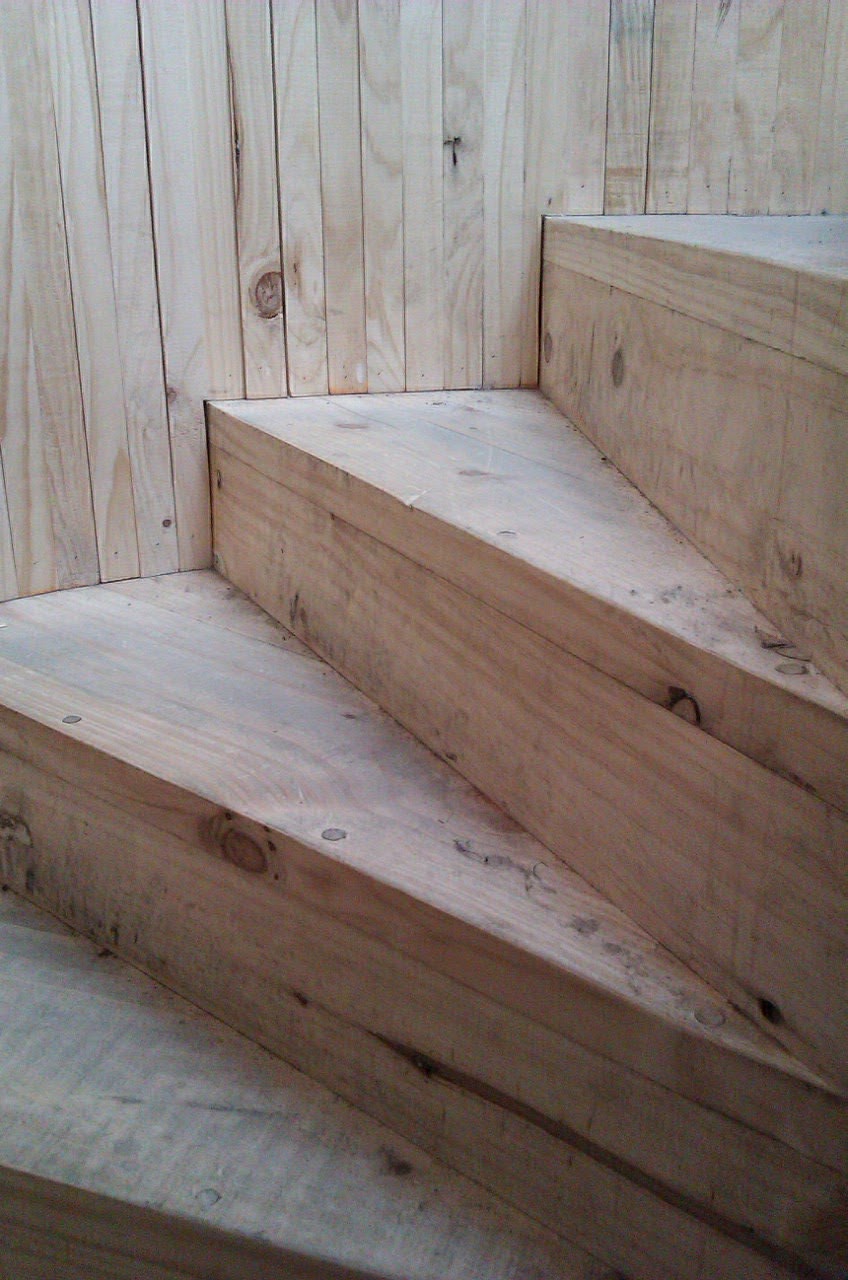 Below, a normally ignored gilded angel near the roof of the gallery is given a chance to shine through a viewing opening in this pine castle. 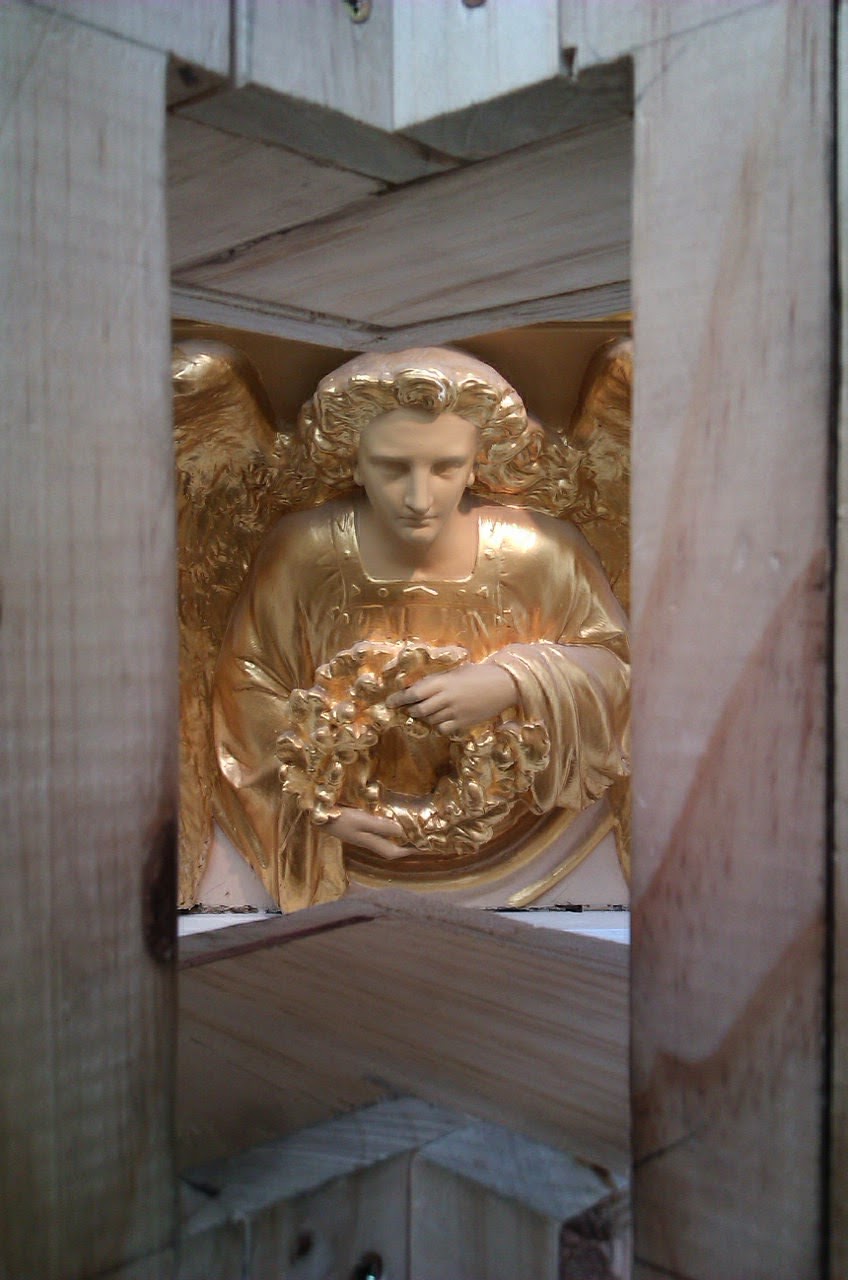 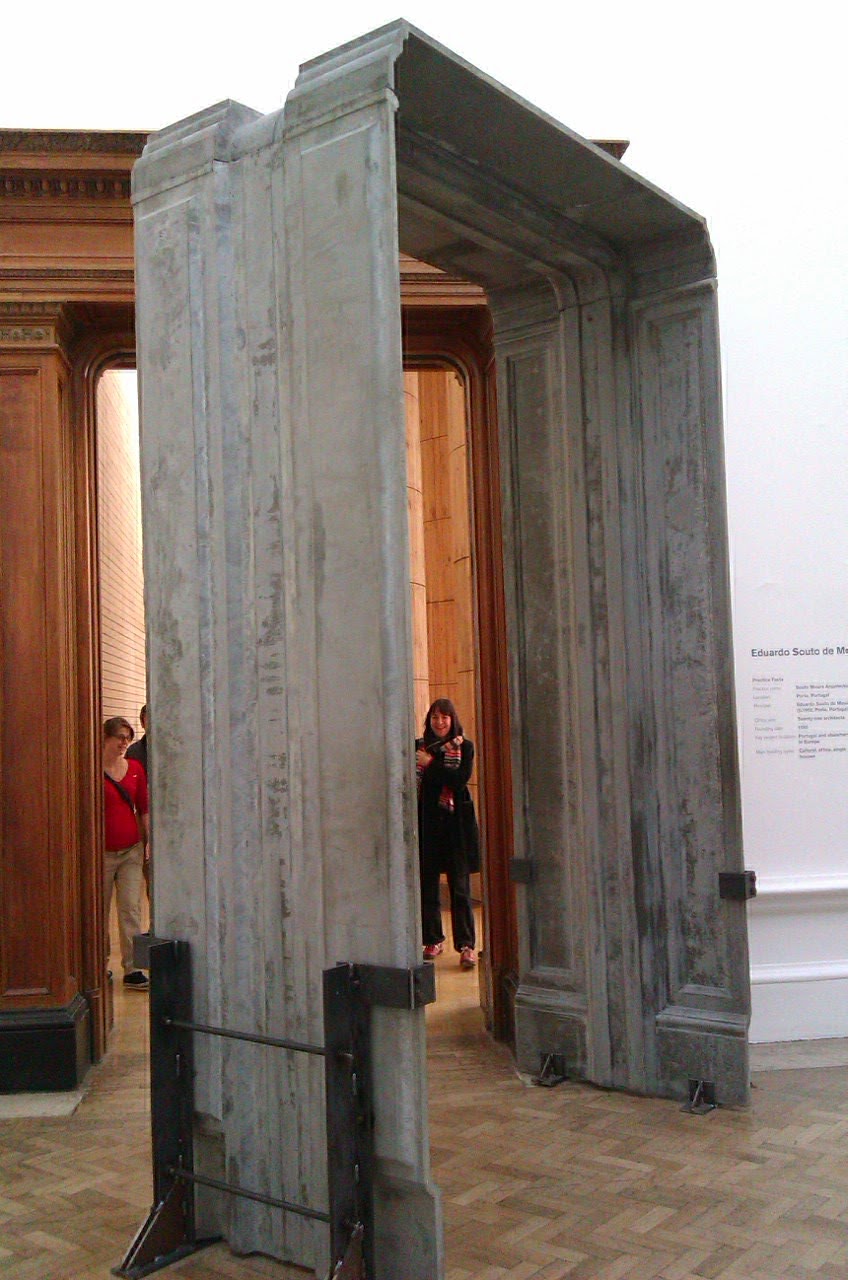 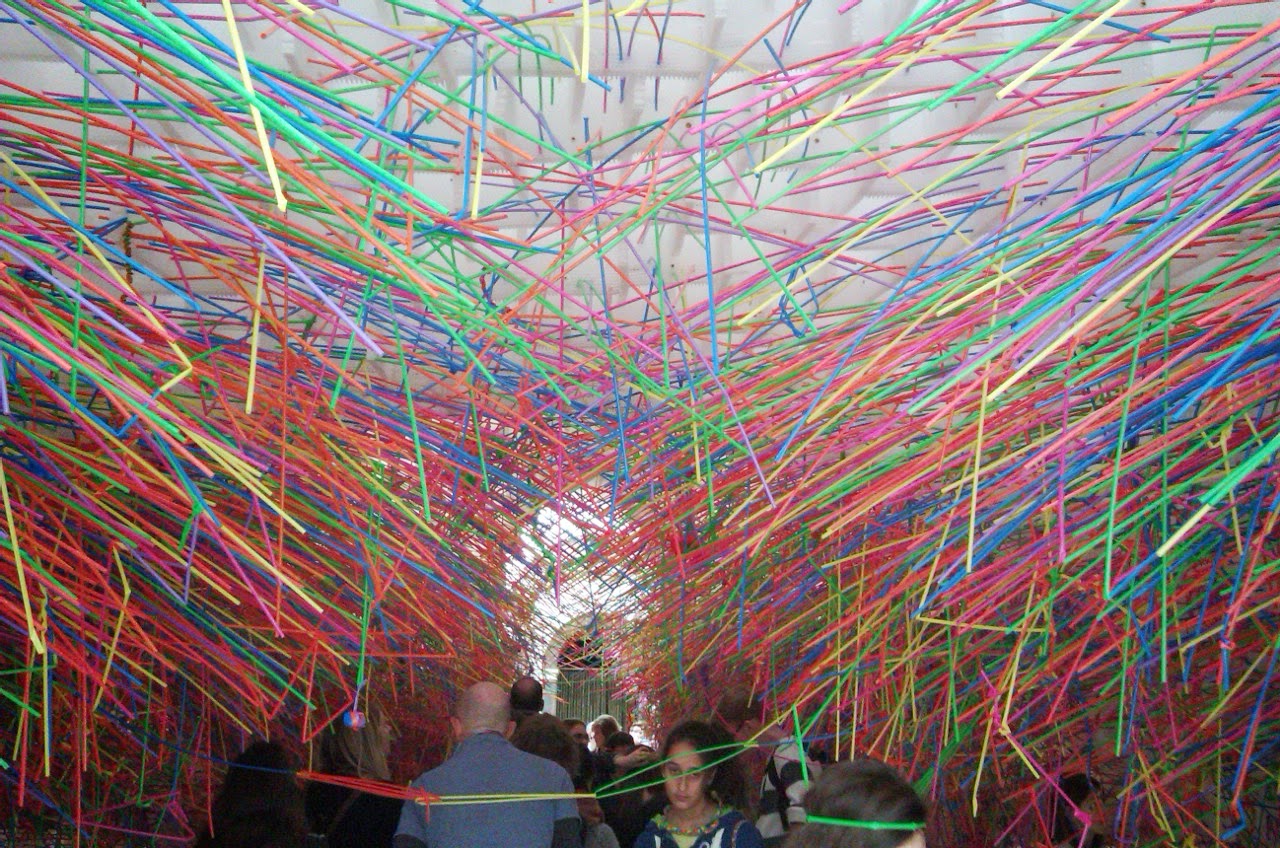 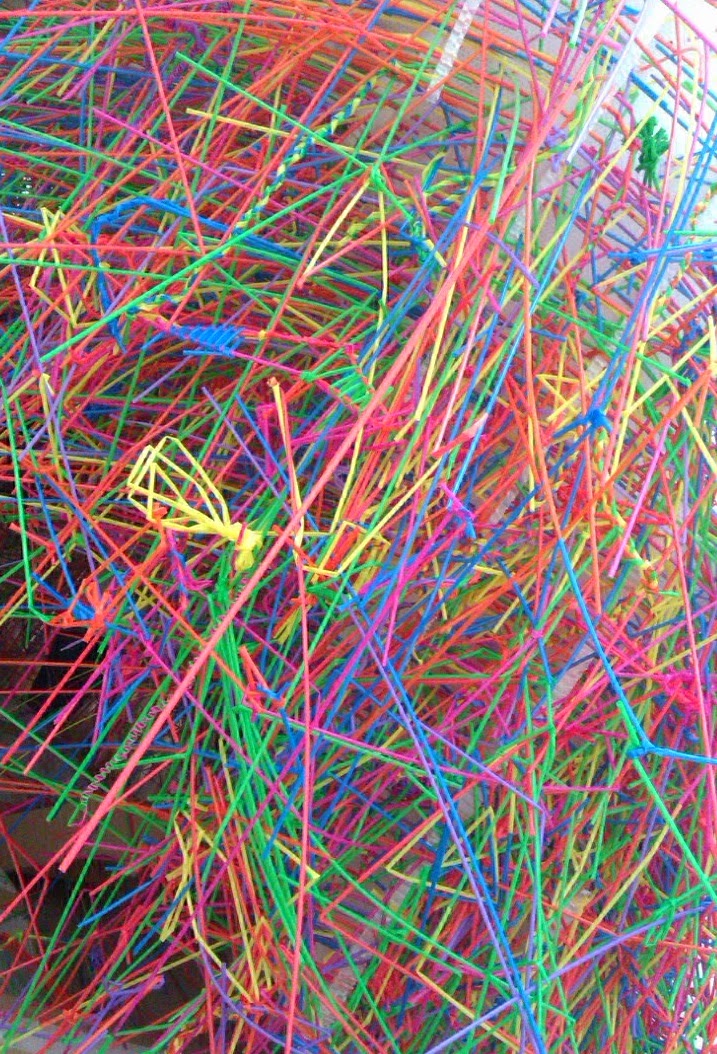 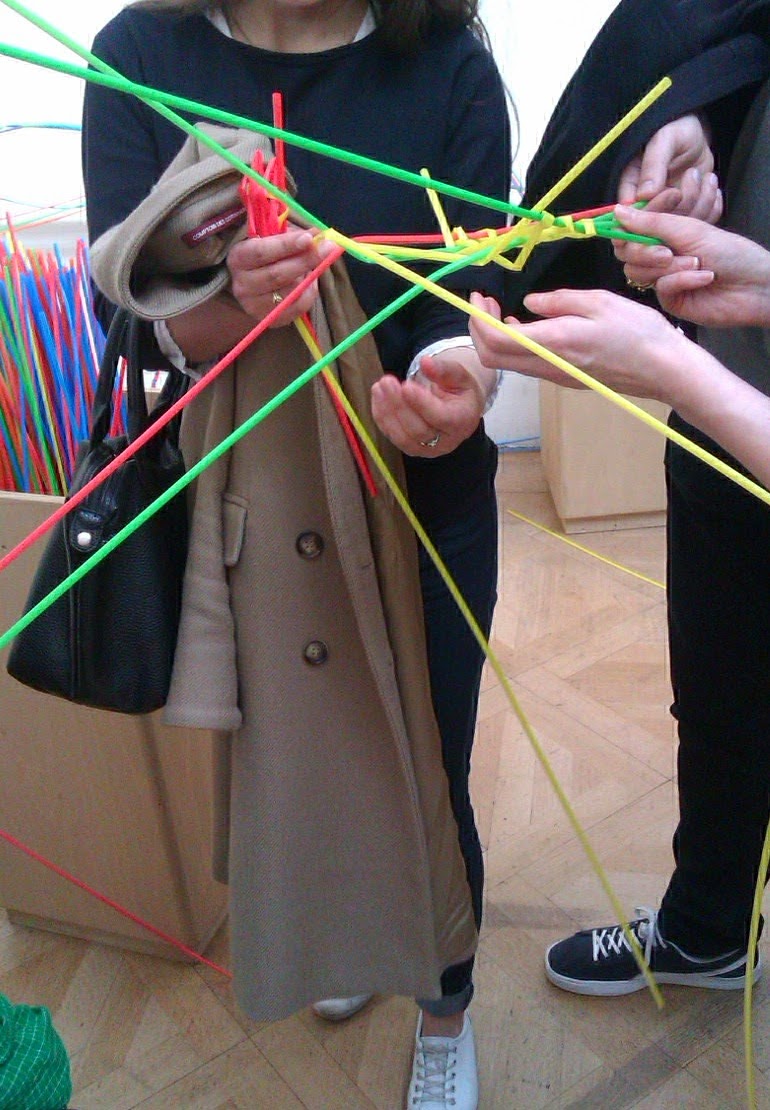 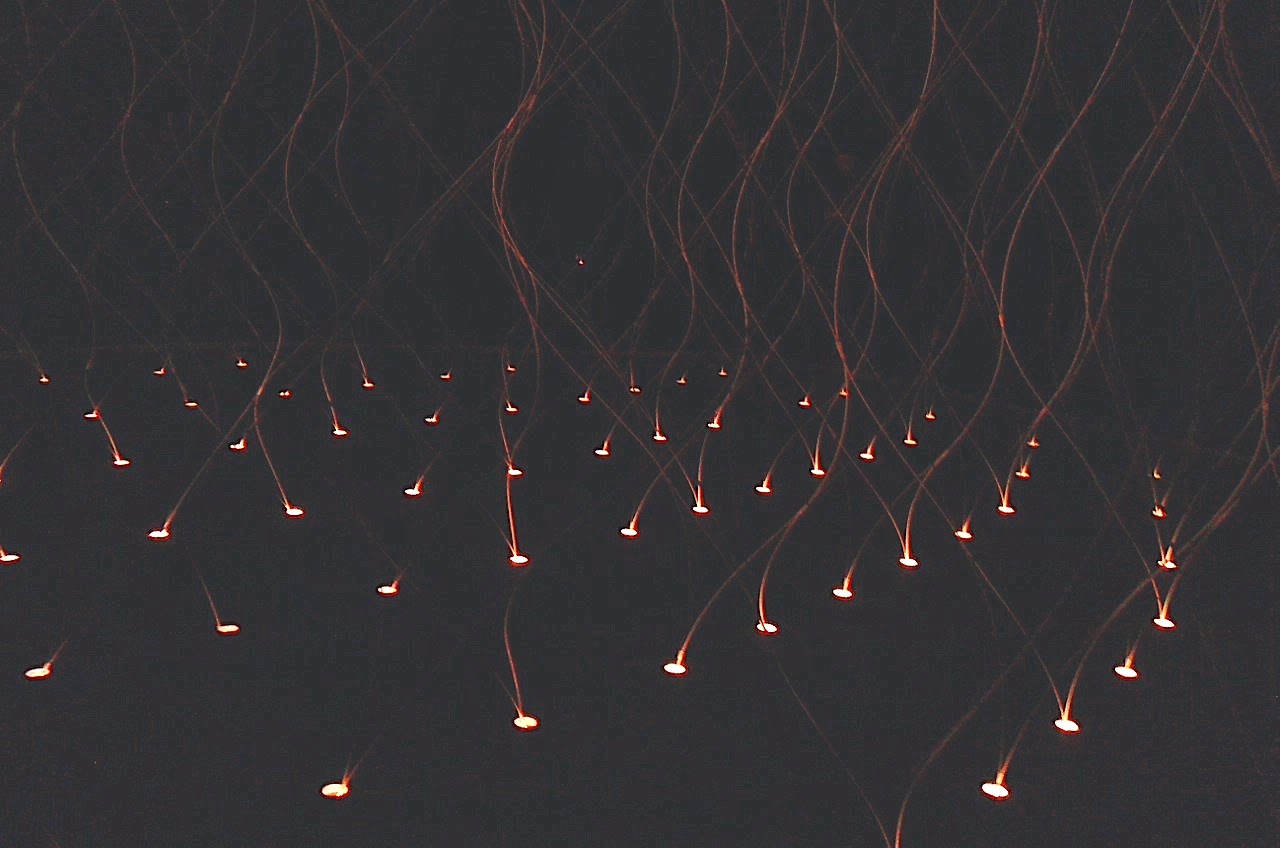 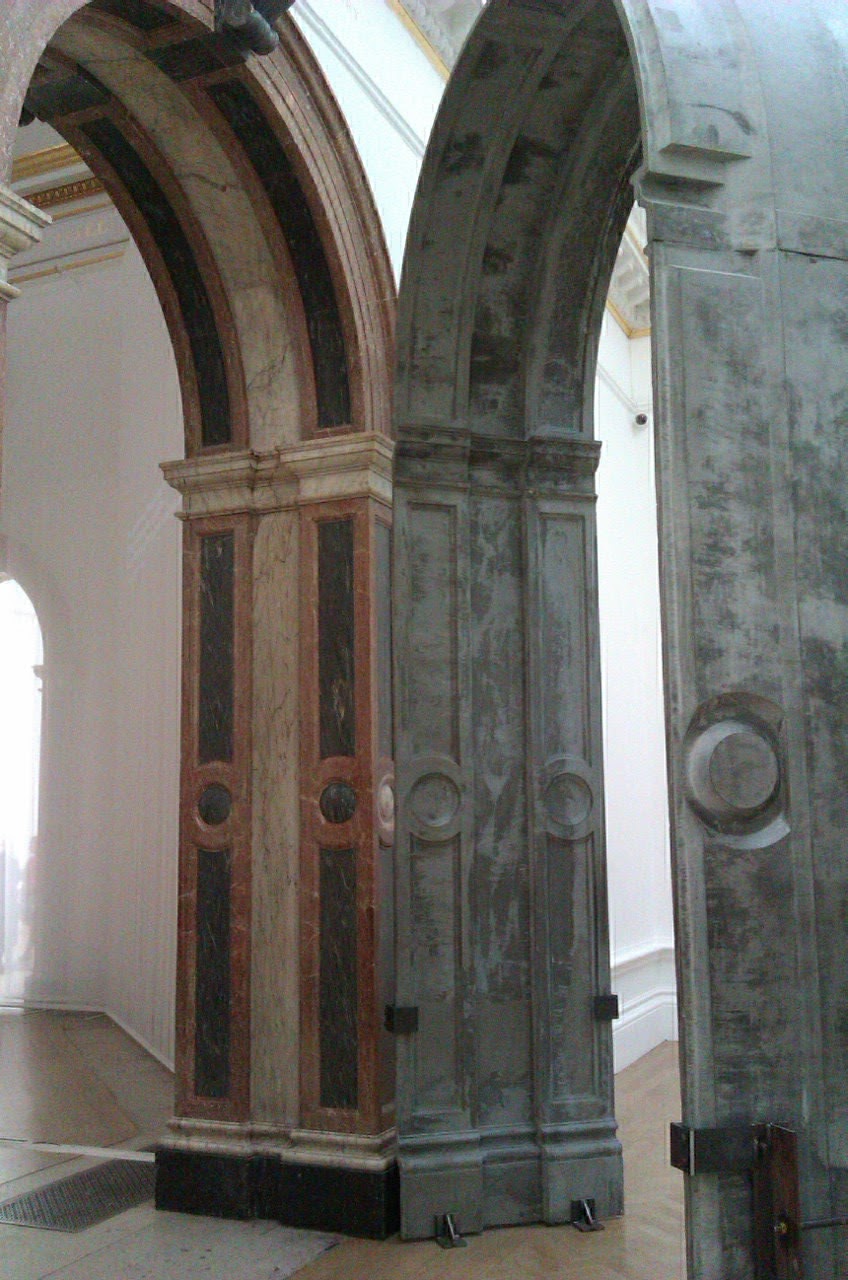 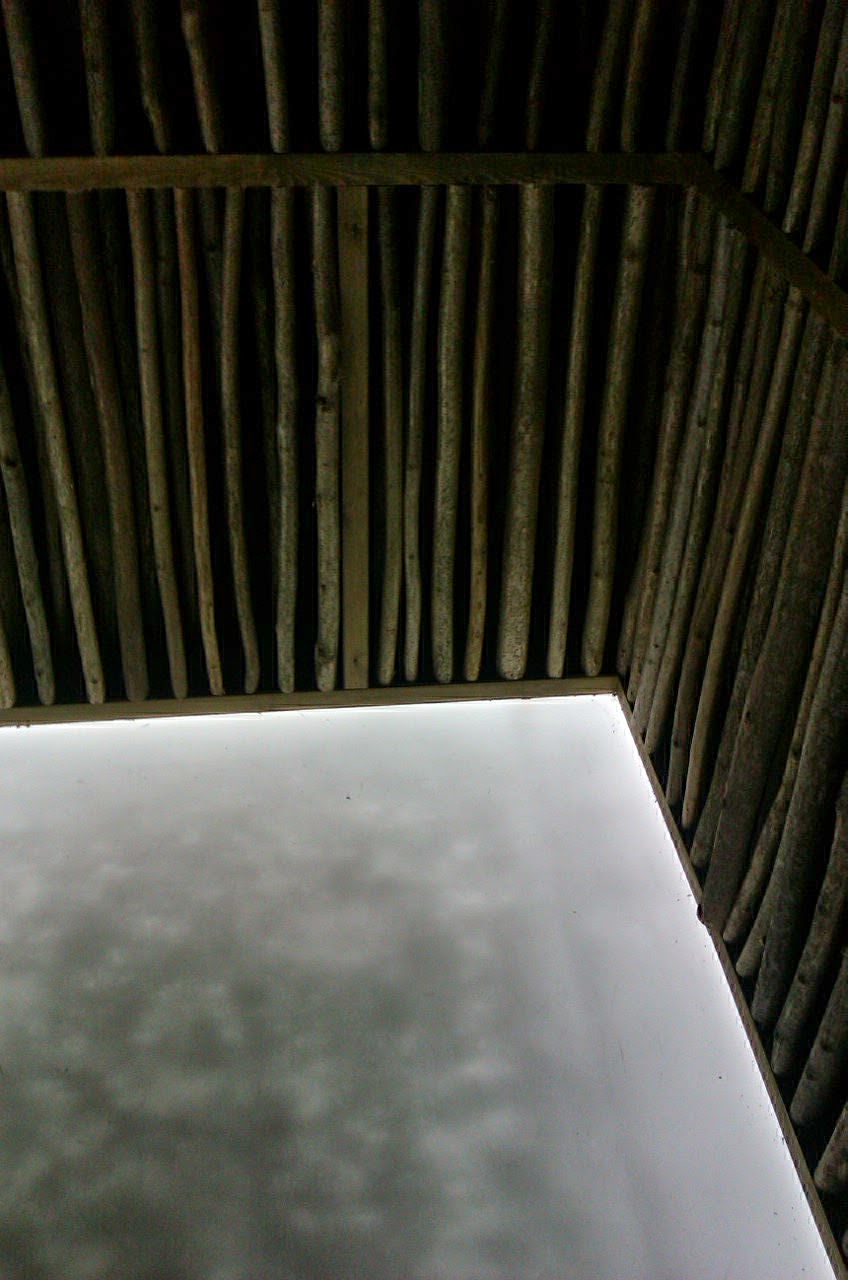 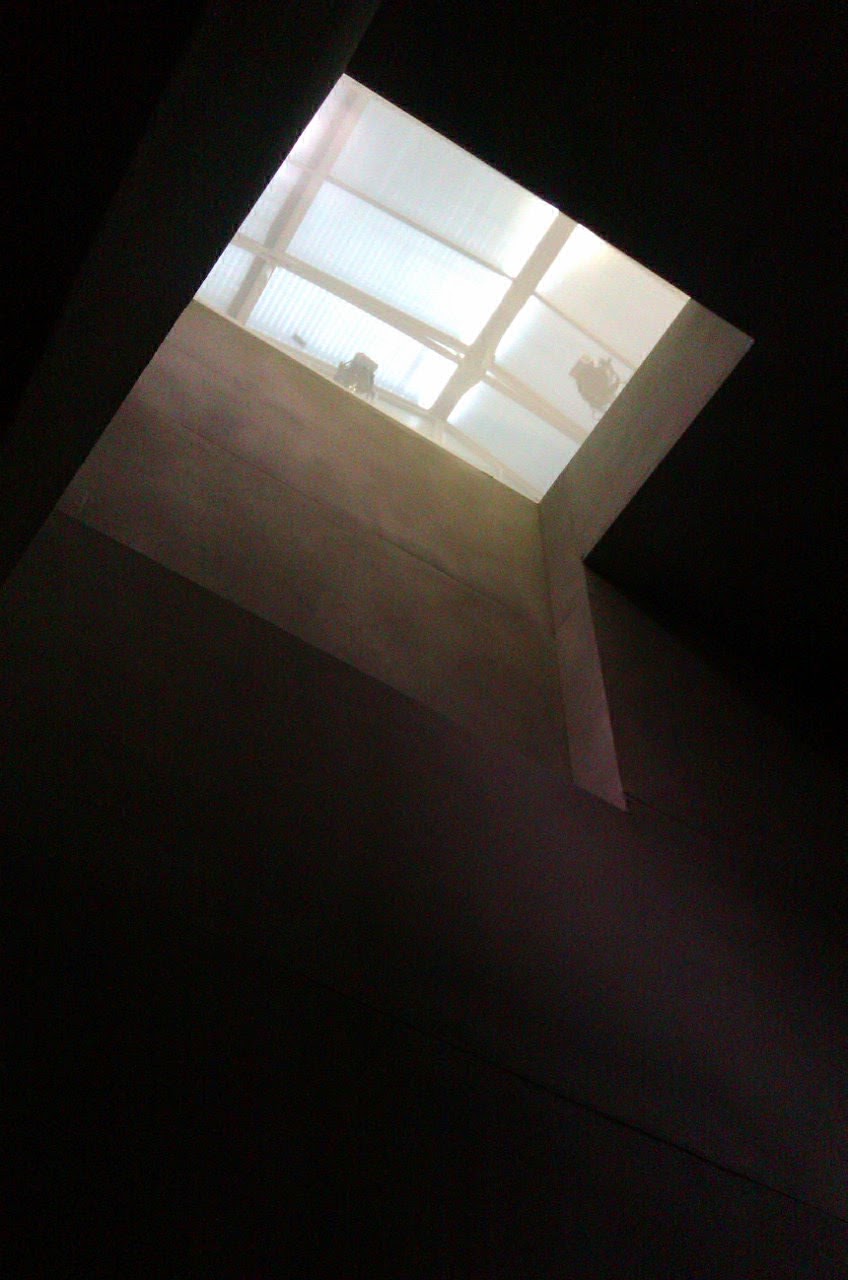 Above and below,
Shafts of misty light add atmosphere to inky sepia space by Grafton Architects. 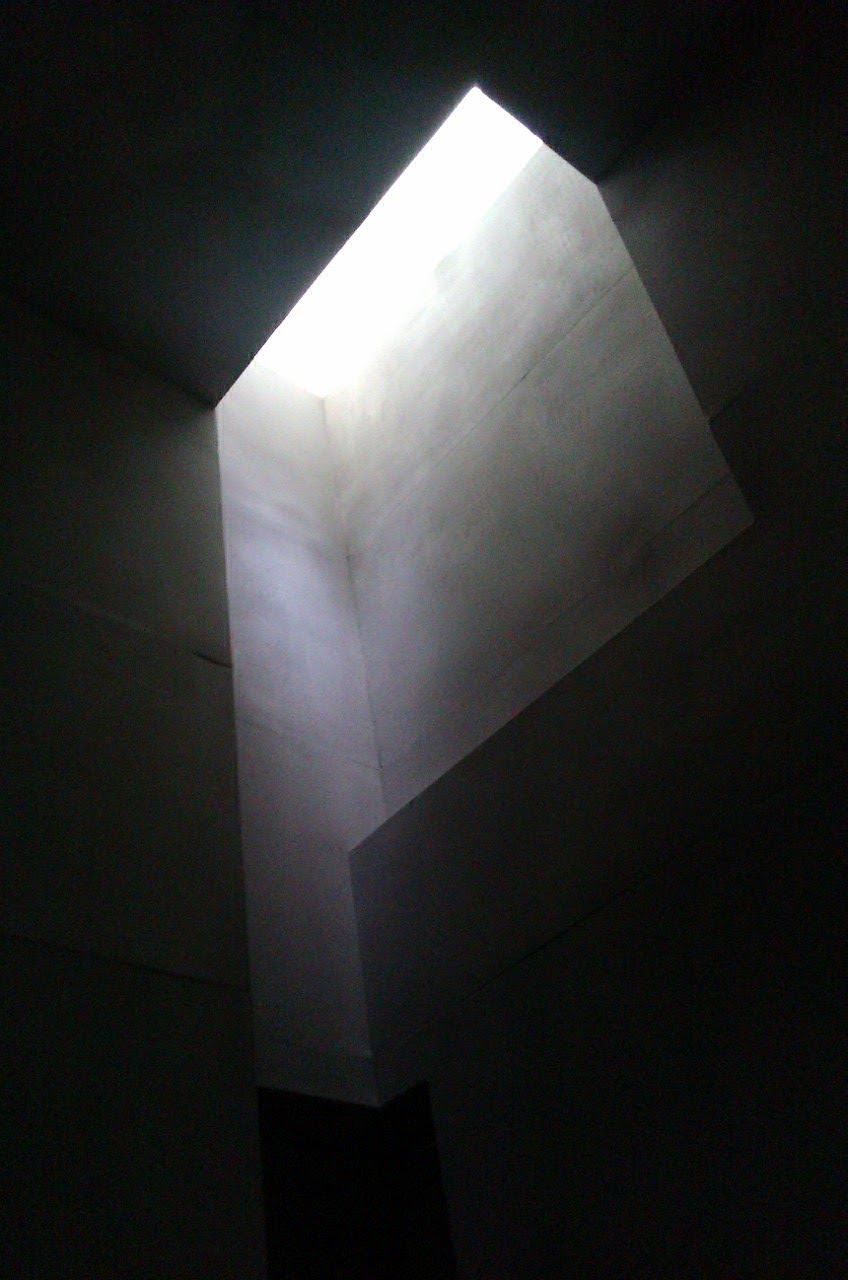 The result is a highly stimulating creative journey through light, shade, void and form which also challenges one to reflect on the wider issues of architecture that we should all be concerned about- what we build, where we build and how we build.
Shelter is one of our most basic requirements and as the London* population rises and property prices force most of us out of the city leaving wealthy enclaves, and divisions between rich and poor grow even wider, how do we accommodate all. We all moan when another homogenous building is erected but one has to remember  architects working in the public sector can only be as creative as his/her client and budget will allow, but not forget that cautionary tale from the 50's-70's where the town planners and architects, left to their own devices, dictated a post war vision of Utopia which turned into a living hell. We also have a government whose agenda seems to be more about privilege rather than provision so maybe it's time we take a more active role in how we house. We now have to consider issues of sustainability, affordability and with an ever increasing population how we use space. The creativity on show at the Royal Academy can give us all hope that architecture can be inclusive and engaging for us commoners.
On a very personal note this exhibition also reminds one of the pure joy of making. As a child I constantly made and constructed- toys, clothes etc. I built a whole village in my bedroom for my collection of felt mice. Shoe and chocolate boxes became houses, flats,schools. I was Toytown planner extraordinare. Incidentally, by way of tangent, it was a matriarchal society led by Granny Mouse by virtue of the fact she the biggest mouse and had little wire glasses, although she was aided by her purple frock coated son, Pierre, so named after Pierre from War and Peace [I wasn't a particularly precocious child in that I was reading Tolstoy at the age of seven. There was, at this time, a BBC dramatisation of War and Peace staring Anthony Hopkins].
Sensing Spaces is on until 6 April and I would highly recommend it.

*As a Londoner I can only really comment on what's happening in my own city.
Posted by Jessica Light at 20:23 No comments: