Erickson Beamon was probably the maddest circus I ever worked in. An explosive concoction of conflicting personalities making fashion jewellery, led by Vicki Sarge, meant a day didn't go by where there weren't tantrums, screaming arguments, histrionics, or tears [on a good day you'd get all four]. Oh the drama! And if I ever questioned some of the behaviour I was always told 'It's Fashion, Jessie'
The role call of people who passed through Beamon's doors was quite breathtaking. From ex Blitz Kids like Dencil and Miss Binnie to bona-fide jewellery designers like Scott Wilson and Kirt Holmes and all in-between- would-be stylists, fashion students and Vicki's next door neighbours. Isabella Blow would often pop her head around the door to say hello as would Mr Pearl and Stevie Smith of Bodymap fame. We even had Lulu in once!
The tales one could tell. There's a great Christopher Biggins story and how Erickson Beamon even came into being involving 70's Manhattan, Studio 54 and copious amounts of Cocaine is legendary, but my favourite and sweetest ode is this;
Three of us decided to go on a jolly to St Ives one weekend and bought back some little stickers of witches for Vicki. Not because she was one but because she was always drawling 'I'm a witch, I'm a witch'. On receiving her gift Vicki immediately stuck one on her forehead, then, forgetting it was there, trotted off to a meeting with Harrods. Who knows what the buyers thought of this raven haired, big horn-rimed bespectacled lady before them sporting a tiny green pointy be-hatted witch on a broomstick bindi trying to sell them beaded baubles.
For all of the above my picks from the past this month come from the Erickson era.
NO.4;
MY FIRST PASSEMENTERIE JEWELLERY COLLECTION
As I've written in a previous post Erickson Beamon was situated in an attic in Clerkenwell and it was here that, in 1993, I designed my first collection of jewellery incorporating my passementerie skills. I hadn't woven for a couple of years so it was a delight to return to my first love. The collection comprised of raw silk woven braids in an earthy palate of clay tones beaded with old gold, terracotta, and natural wood beads set off with gunmetal chain and findings. It was the first time I'd ever seen anything I'd designed/made on a shop floor. The collection sold to Liberty and I would go in often and press my face up to the glass cabinet they were displayed in and just stare at the pieces until one by one they got sold. It was also the first time I had anything I'd designed/made  in the press. I didn't get credited but I knew it was me and that was all that mattered. 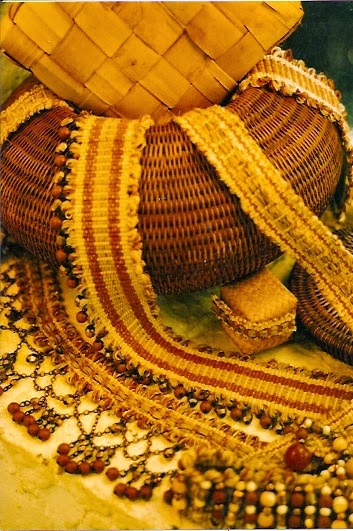 Above and below,
My passementerie jewellery collection. 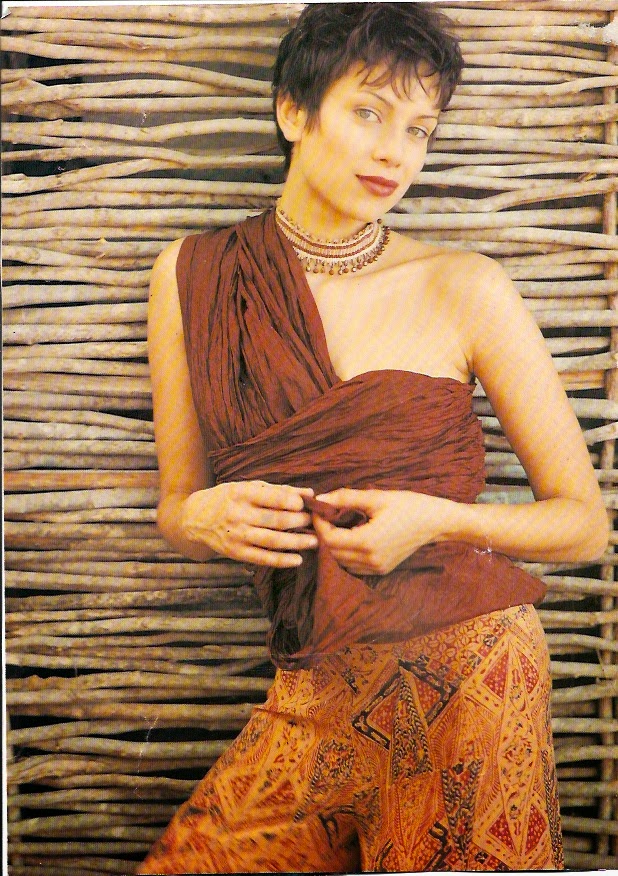 NO.5; RIFAT OZBEK JEWELLERY
At Beamon we often did the catwalk jewellery for many of the designers at that time- John Galliano, Tomasz Starzewski, Anna Sui, Dice Kayak [whom I made a tasseled skirt for] and Rifat Ozbek.
By 94 Erickson Beamon had moved to Elizabeth Street in Belgravia and opened a shop with a design studio/workshop in the back. The new  light and spacious surroundings didn't work any miracles on the myriad of bad behaviour from it's residents but it was here that I worked on one of my all time favourite [if not the favourite] projects- the accessories for Rifat Ozbek's Autumn/Winter 95/96 catwalk show in Paris.
The premise was Tribal Cyberpunk and Rifat wanted a mixture of ethnic, feathers and machinery. I really got into the spirit of this and went foraging for materials. The butcher gave me braces of pheasant wings and tails which I plucked for the feathers and the local electrician gave me a a load of circuit boards which I got cast in chunks of clear resin. Along with these and some metal computer innards that Rifat gave me I added African and Indian glass and metal beads and Turkish coins to produce a collection of necklaces, bangles, cuffs, amulets and chokers. 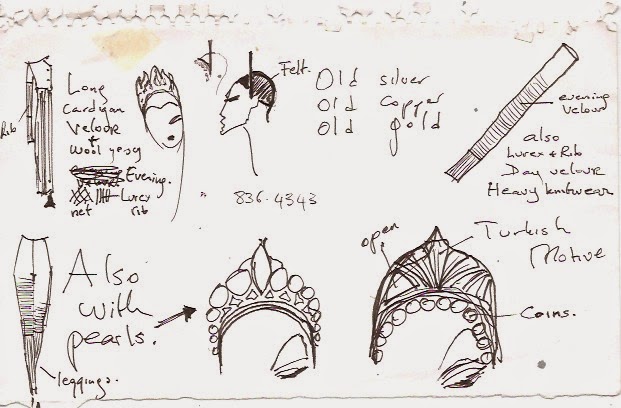 Above, some Ozbek sketches for the collection.
Below, metal computer ribbons which I cut up into sections and incorporated. 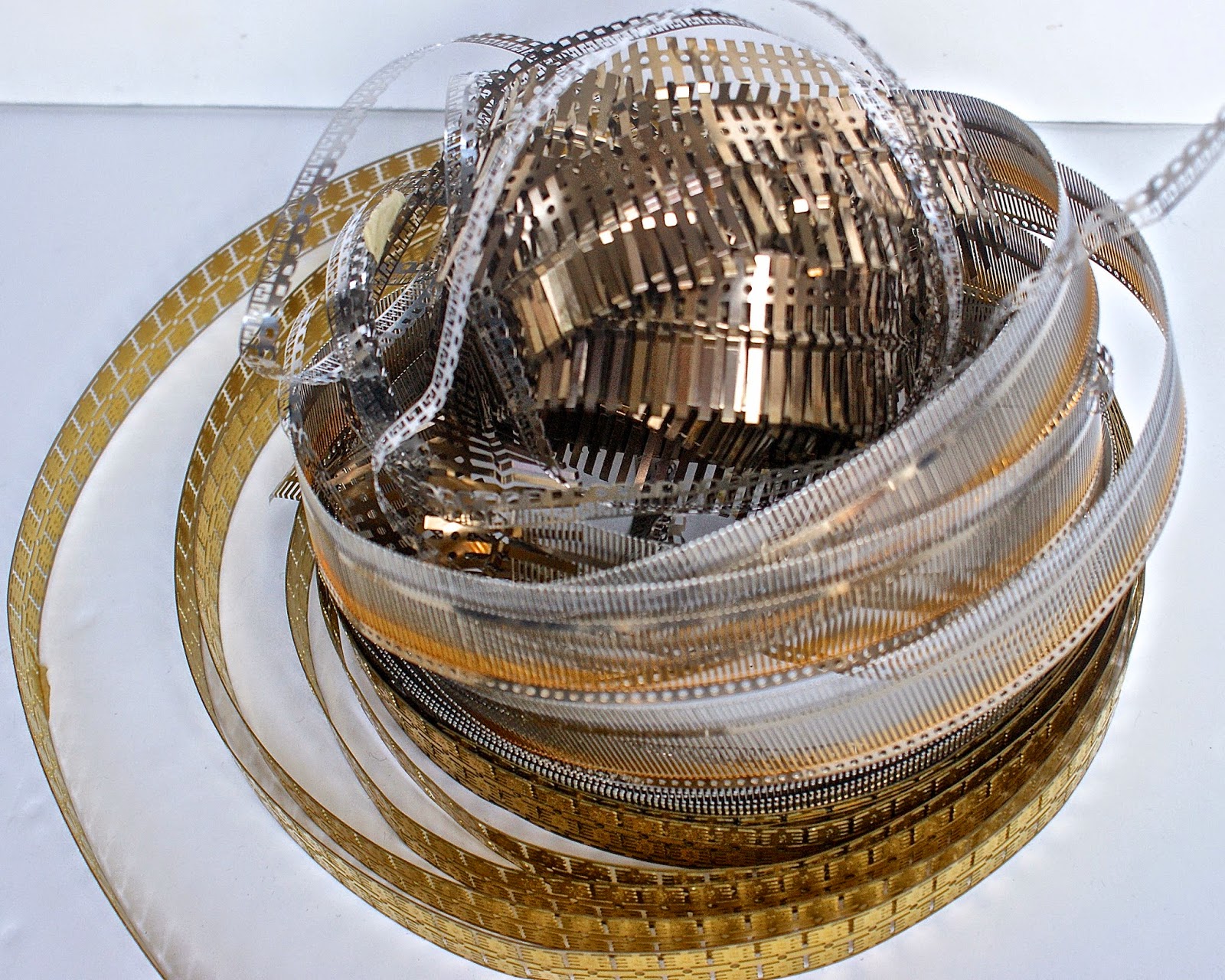 This was a creative joy to work on, especially three Balinese style headdresses. I made them from wire, beads and metal ribbon. All sorts dangled off them. I had no need to source reference material as I had recently come back from Indonesia where I had seen many headdresses of this type, adorning dancers and brides. 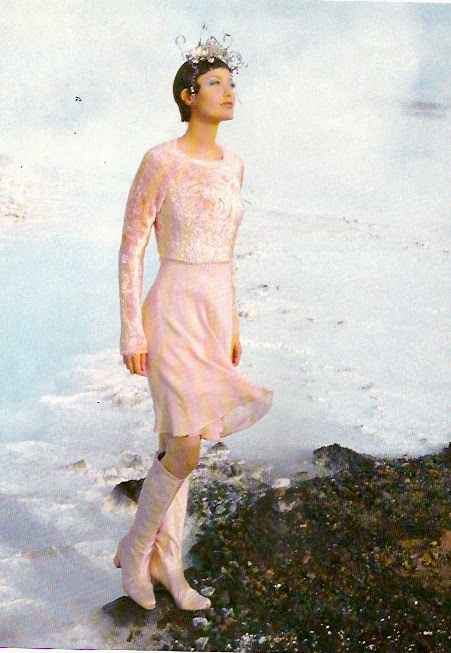 Above, one of the headdresses.

I adored Indonesia. A string of islands that bridge the Indian Ocean and the Pacific that is so diverse in peoples, terrain and it's wealth of arts and crafts. From Java's batik to the ikat weaves of Flores and Sumba, the place just creaks with colourful cloth. But it's not just about the textiles this archipelago practically sinks under the weight of it's decorative arts and even as I was trying to fit one more wafer thin ikat into my backpack I came across the ceremonial headdresses. 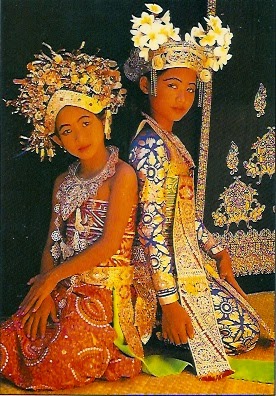 Above, Balinese dancers.
Below, a wedding on Lombok with a familiar looking bridesmaid. 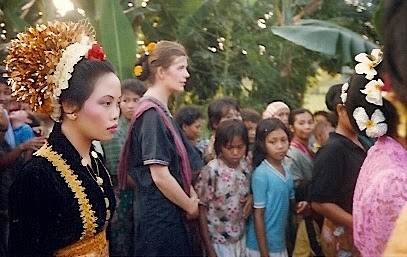 Yes. That's me. Still not sure as to how this happened. I was asked to the wedding and the next thing I knew I was trussed up in local dress and stuck in the bridal procession. No wonder the bride looks in a right strop. I would be too if my maid of honour was a complete stranger who had just rocked up about ten minutes before.

I don't have any images of all the baubles I made for Rifat Ozbek. This was before camera phones when we only had carrier pigeons to peck out a picture, but I did find some video which I have already posted.
I left Erickson Beamon in 1996 to go to Australia  Did I jump or was I pushed? Well, that's Fashion Jessie!
Posted by Jessica Light at 16:05 No comments:

Third section of Rifat Ozbek catwalk show with all jewellery, necklaces, chokers, bangles etc made by me. Look out for the amulets.
Posted by Jessica Light at 16:04 No comments:

Second section of Rifat Ozbek catwalk show with all jewellery, necklaces, chokers, bangles etc made by me. Look out for the three Balinese style headdresses I also made.
Posted by Jessica Light at 16:04 No comments:

First section of Rifat Ozbek catwalk show with all jewellery, necklaces, chokers, bangles etc made by me.
Posted by Jessica Light at 16:04 No comments: