It seems entirely fitting that as Spring slowly draws the blind up on winter and a swathe of timid sunlight paints a pale stripe down the wall, the first major exhibitions of the year should also put the spotlight on that most essential of elements, light.

Our giant light reflective tassel. I hide in it when I'm feeling melancholy.

Man Ray, aka 'The Master Of Light' is renown as one of the most experimental and creative artists who used the medium of photography. This self-taught American, born in 1890, is mainly associated with the Surrealist and Dada movements of the early 20th century. His meeting and subsequent friendship of Dada French Artist, Marcel Duchamp at an Artists Colony in New Jersey resulted in him moving to Paris in 1921 and mingling with the Avant Guarde that would later become his subjects.
Winding your way through The National Portrait Gallery's 'Man Ray Portraits' your path is lit by 20th century luminaries. The intense dark eyes of Dali, Picasso and Cocteau follow your every response and The Beautiful, The Powerful and The Downright Bizarre are surrounded by halos of light, silver linings or placed in surreal settings with intent to fascinate your attention. Ray's manipulation of light and shadow to cause solarization is a signature look of his work. 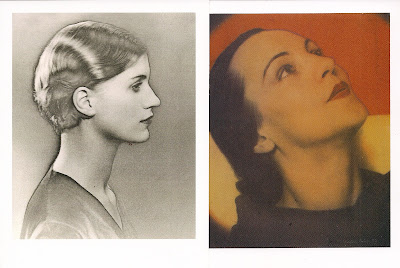 Above, two of Man Ray's portraits.
Left, The beautiful Lee Millar, 1929, and Man Ray's then lover, who went on to be a highly acclaimed fine art, and later a war photographer, in her own right, and was one of the first people into Dachau concentration camp when it was liberated in 1945.
Right,Genica Athanasiou 1933. Man Ray's first colour portrait.

Viewing these photographs and others from recent exhibitions- Beaton at the Imperial War Museum, Storyteller [Tim Walker] and the current Landmark [look out for Pivot Irrigation by Edward Burtynsky -an extraordinary beautiful image of a landscape the everyday would consider barren] at Somerset House, made me think about the photographers connection to his/her craft. It's easy to forget, in this digital age where the kit becomes more sophisticated by the minute and we can process/edit/delete our own images at the touch of a button, the excitement of being locked in a darkroom [especially if it's with the object of your desire], inhaling those heady toner fumes and watching, through a number of intense processes, an image slowly materializing before your eyes.
The ongoing debate as to whether photographic images constitute Art [Man Ray often felt they didn't]now has another front, the heated battle between film v digital. Both sides have their champions and the question- Which do you prefer?- is one I've posed to many a photographer. But, as one photographer put it- If you don't have the creative eye for composition in the first place neither format matters-
Now that that humbling experience of getting your holiday snaps back from Boots, to find out that, from a roll of film of 36 pictures, 35 are out of focus, have red eye or are of your feet, is no longer with us, it's good to see so many major galleries showing collections from the magic box that is a camera to remind us that photography isn't just a means to record people, places, events etc but a creative outlet to inspire, provoke and question.

'The Light Show' at The Hayward Gallery on the South Bank is a collection of exhibits that explore artists response to light as a material. You are greeted by a cascading waterfall of sequenced flashes of light like a glittering sparkler shower from the majestic 'Cylinder' by Leo Villareal. A good opener for a show that has drama and power throughout. 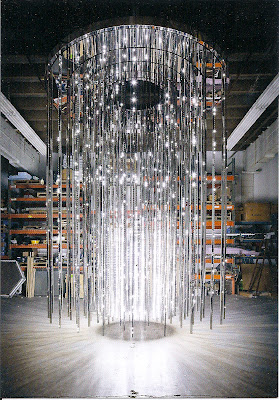 The exhibition continues with  instillations that play tricks with your senses, sometimes disorientating, sometimes disturbing, sometimes calming, at all times engaging and interactive. Neon, fibreoptic, halogen, and LED are all used to create light, dark, shadow and colour. One minute you're standing within a smokey single beam of light in a dense dark room, the next sent into a claustrophobic eternity of surrounding repetitious lights and mirror when you step into  Ivan Navarro's Tardis-like phone-box, 'Reality Show', finally ending with the overwhelming nausea inducing effects of strobes set on water fountains. 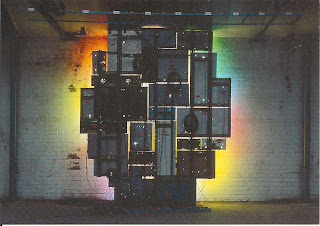 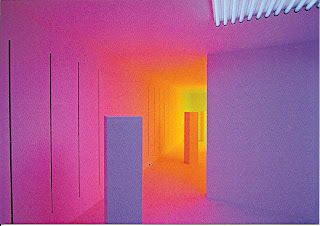 Inspiring? Very. Especially as it turns ones thoughts to the visual effects of light on perception of colour and space. It also triggered comparisons and usage to other disciplines. For example 'Chromosaturation' reminded me of the Modernist Mexican architect Louis Barragan whose use of colour was integral to his buildings, but also relied on the Mexican tropical light to bring out their colourful vibrancy. 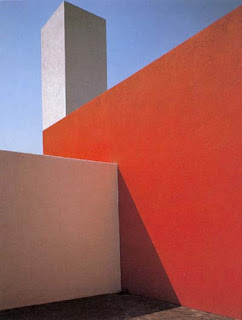 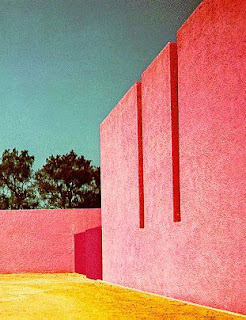 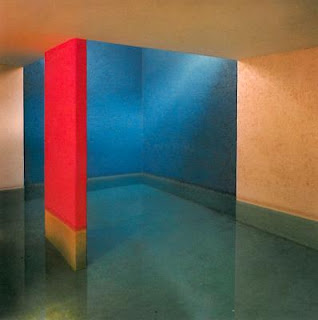 Above, 3 examples of Barragan's work.

Bright and blocked colour has been prevalent in interiors and products for sometime and a trend as popular as this takes a while to wane, but I do think that light is going to play a big part over the next couple of seasons on how we look and perceive colour. Brights will become more diluted, bleached, and reflective or deeper and intense as if someone turned the lights out on a room of colour. 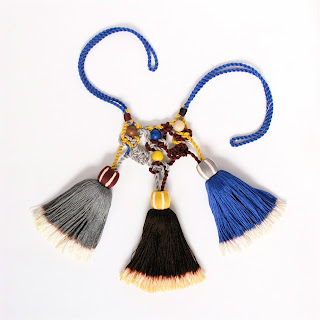